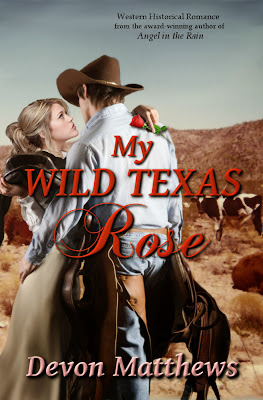 When Rose Benton left Texas five years ago, she carried a secret that tore her family apart. Now she's back to confront her brother, whose disastrous debts have endangered the family ranch. Faced with losing everything, Rose turns to the one man who can help—handsome, headstrong Trey Delaney, her late father's former right-hand man.

With their adjoining ranches legally tied, Trey has only two choices: agree to Rose's plan, or lose his own birthright. Caught between hard luck and a desperate woman, Trey has a few tricks of his own in store for the neighbors who stole his land.

The 1880's cattle country heats up when Trey and Rose unite to thwart her brother's scheme and save their land. In tough, protective Trey, Rose at last finds a man deserving of her trust. In Rose, Trey discovers a spirited woman with a heart as big as Texas. Can they heal old wounds and give in to the love both need... or will desire turn to dust when past betrayals are destined to repeat with a vengeance?


Available NOW at Amazon
In Ebook and Print

Angel in the Rain

(Winner of the OVRWA Enchanted Quill) 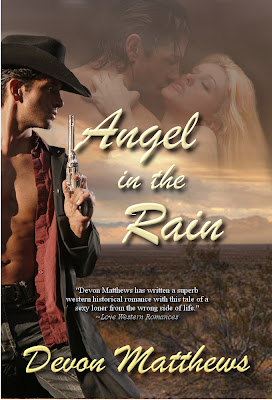 After two years of finishing school, Angel Clayton is determined to redeem herself and become a lady like the mother she never knew. But her wild Texas legacy returns to haunt her when she finds herself the unwilling pawn in a battle of wills between her father's enemy and a sexy pistolero whose reputation makes hers look positively angelic.

Rane Mantorres is a gunfighter with a big reputation and an even bigger score to settle. When he learns his enemy plans to kidnap a wealthy rancher's daughter, he foils the plot and kidnaps her himself. Now he must dare far more than he bargained as he's caught between his thirst for justice and a burning desire for his spirited hostage. Will he risk all--his revenge, even his life--for one night of unforgettable passion with an angel in the rain.

The moment she stepped from the stagecoach, cold chills skittered over Evangeline’s skin. She saw nothing out of the ordinary. Nothing that should have made her uneasy in the least. So, why did she feel as though someone had just stepped on her grave?
The Agave Flats relay station looked much the same as a dozen others she’d seen since leaving the train three days ago—a crude blend of rough-hewn wood and adobe, flanked by knotty-poled corrals, standing in the middle of an empty landscape.
“Thirty minutes, ma’am, if you want to stretch your legs,” the stage driver called.
She forced an answering smile. If she “stretched her legs” much more, she wouldn’t be able to fit them inside the coach. With each interminable stop, she found it harder to tamp down a growing feeling of unease. She needed to be home.
A station attendant led away the horses, amid a swirl of dust. Evangeline looked down and slapped at the grit clinging to her fine, fawn wool traveling suit. Aunt Nelda would have a conniption if she could see her standing there without gloves or even a parasol to protect her ladylike pallor from the harsh southwestern sun. She heaved a breath and turned her back to the warm, grit-laden wind.
That’s when she saw him.
Nerve endings jolted when she spotted the dark figure nearly blending into the shadows of the relay station. The man stood with a shoulder braced against the outside wall, his thumbs hooked on the edge of a low-slung cartridge belt. One booted ankle anchored over the other. His relaxed pose stretched dark trousers taut over a long, muscled thigh. The black hat riding low on his forehead hid all but his chin and sardonically quirked mouth. His very posture exuded arrogance and something more. Something so darkly compelling it bordered sinister.
She knew he was staring at her. Right through her, in fact. Though the hat brim concealed his eyes, his gaze raked her with the impact of a physical touch.
Being stared at by men was nothing new to Evangeline Clayton. A woman traveling alone was a magnet for every roué along the pike, and she’d received her share of suggestive winks and leers during the train ride west.
Somehow, this man’s veiled inspection affected her more, probed deeper, as if he knew her very thoughts. She sensed a coiled energy behind his indifference, like a cat poised to pounce. And she had an eerie feeling that she was his prey.
“Miss Clayton?”
The driver’s voice tugged at her. With reluctance, she turned her back on the enigmatic stranger.
“Yes?”
“Just wanted to tell you, there’s coffee inside, if you want to step in out of the wind while we change the horses.”
“Thank you, Mr. Stewart. I just might do that.”
Evangeline watched the driver walk away and worried the inside of her bottom lip between her teeth. Tiny tingles continued to chase up and down her back.
Abruptly, the sensation vanished. She turned, knowing she would find the man in the shadows gone.
****
﻿

Welcome! Come on in! If you enjoy Romance in the Wild West, you've landed in the right place. I'm Devon Matthews and I write Western Historical Romance. Kick off your boots and cool your heels while you have a look around the place. Thank you for stopping by. I hope you'll come back and visit real soon.
Happy reading!
Devon
Contact email: devmatthews@gmail.com
If you would like to receive notice of new book releases, follow Devon on Amazon.

Other Places to Find Me